A combination of organic materials melted together in an industrial look.

This clock is really an eyecatcher. 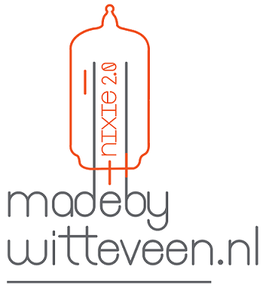 The Clock is delivered with a net adapter.

The fascination of NIXIE-tubes, that's where it all began.

Those little warm glowing cypher tubes are unique and uncommon.

The wonder and enthusiasm that someone passes through when seeing a NIXIE-tube for the first time is like a kid in a candy store.

Hold that feeling and experience this bridge to the past.

Before LED's and computer flat screens existed NIXIE-tubes where produced roughly from the 1950's  until the 1980's.

Used in the early computers, factory's and power plants.

Old stock is still being traded around the world but prices are going up and up.

Doing something you love sounds easy but finding out exactly what that is, that is the hard part.

Selling, building and designing NIXIE-tube clock is something what occupies me beside my day-job.

What I love doing the most is creating and building, whatever it may be.

Combine that with my electronics background and working with organic materials the NIXIE-tube clock is a match for me to express myself.